After spending the highest annual amount on research and development ever, apple shows no signs of slowing down in its R&D investment for 2017 despite a drop in the company’s overall revenue. 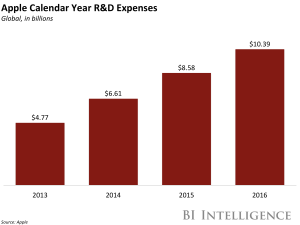 In early 2017, there was vast speculation regarding what projects the company would be investing in. The following assumptions were made:

In February, Chief Financial Officer, Luca Maestri, announced that the R&D spending is, in fact, attributed to investment in chips. While this announcement was something of a much smaller scale than anticipated, Maestri emphasises that this research  is very strategic and important in order for Apple to differentiate itself from the rest of the industry. This advancement in chip specifications will alter the screen and physical features of future Apple products.

After the build-up of expectations as to what lies ahead regarding advancement and innovation for Apple products, there are dangers that the investment in chip specifications may appear as underwhelming to the market. This could potentially take the shine off a company that prides itself on promoting excellence in design, retail and sales. Furthermore, it puts a lot of pressure on the iPhone 8 to deliver and to keep pace with the innovations in the handheld devices market with competitors such as Android.

The company’s financial gurus remain optimistic that the planned projects for future innovative products will be substantial enough to uphold Apples unique design and innovation image.

R&D investment remains a strong priority and of significant importance to Apple’s success and satisfying their customer expectations. Therefore, Apple indicates no slowing down on investment in R&D, and is optimistic about the level of consumer anticipation leading up to the tenth anniversary iPhone release.

If you have any further questions about R&D or would like to find out whether your company is eligible for the R&D tax credit, please contact one our R&D tax specialists.