From creating Vegemite and bionic hearing aids to commercialising penicillin and the first notebook, Australia’s past is rich with creations of ‘world firsts’. Now, Australia is looking at being the first in the world to trial passport-less travel. However, is this actually a notable idea or just a bold response to Australia’s publicised lack of innovation?

Certainly, Australia has been under fire lately for stalling in innovation and the Turnbull government has stressed the need for an innovative culture shift. Whilst Australia was in the world’s top one per cent of cited research papers on technology, science, maths and engineering, it ranked 72nd for ‘innovation efficiency’ on the Global Innovation Index this year.  Dwindling innovation rankings has had the Turnbull government pushing incentives to boost entrepreneurism and technology adaptation –   from making coding compulsory in schools to children becoming footpath proprietors of their own lemonade stand.

In relation to this, the latest innovation fuelled agenda was the Foreign Affairs Department’s, ‘ideas challenge’. The top 10 ideas were delivered to a quartet of judges, who were fond of the idea of passport-less travel. Using cloud technology, a traveller’s identity and biometrics data would be stored in a cloud, hence carrying passports would no longer be a necessity and the risk having them lost or stolen would be diminished. Considering that 38,718 passports were registered as lost or stolen in 2014-2015, this could be a solution to significant problem. Currently, Australia and New Zealand are in discussion for trialling the concept, however, concerns have been raised about the feasibility and security of the idea. In response, Foreign Minister Julie Bishop admitted security standards would have to be met to store personal information in the cloud, but is optimistic the idea could go global. 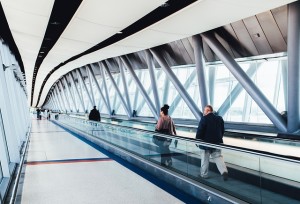 Nevertheless, will passport-less travel cement Australia’s position as an innovative country, or should we be focusing our efforts elsewhere? As we mentioned earlier this week, creating a correlation between science and business via university-business partnerships could drive innovation and the economy up. Today, Professor Ian Chubb released a report, Boosting High-Impact Entrepreneurship in Australia, which noted that Australia needs to shift it’s reputation as a ‘lucky country’ to be known as an ‘entrepreneurial country’. Chubb suggested doing so by linking university funding to a number of start-ups created by staff and graduates, he also highlighted the need to encourage an entrepreneurial mindset at every level of education – encompassing school, university and the work place.

What is your opinion, could passport-less travel be one of Australia’s contributions of ‘world firsts’, or instead should we be directing our attention on making improvements on our education and start-up ecosystem?