European Dung Beetles To Help Farms All Year Round 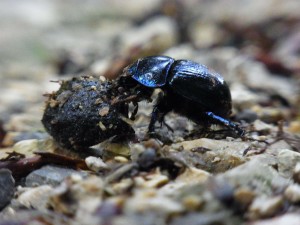 A five-year, $23.7 million dung beetle project has been announced this week that will help control parasites.

Two new species of French dung beetle will be provided to over 1,000 livestock producers around south-eastern Australia. The scheme will use dung beetles as ‘ecosystem engineers’ in order to improve the health of soil and pastures and reduce the spread of diseases and nutrient run-off into waterways.

These beetles will be active in spring and it is hoped that they will decimate bush flies in areas of moderate temperature all year round. At least four more species of dung beetle will be introduced into the country over the next five years, in order to have beetles that can work during every season.

The beetles have been mass reared by Dung Beetle Solutions Australia and are expected to do well on cattle and sheep farms. Trials with small numbers of beetles have been completed and over the next five years, more beetles will be released and monitored at larger trial sites.

Barnaby Joyce, Minister for Agriculture said that the “humble dung beetle” could deliver big benefits to Australian farms. “We know it’s important that R&D isn’t just pie-in-the-sky ideas, but can be translated into real results and the Australian Bureau of Agricultural and Resource Economics and Sciences have found that for every dollar the government invests in agricultural R&D, farmers generate a $12 return within 10 years.”

Each year, 80 million tonnes of dung is produced by Australian livestock. Dung beetles have been shown to greatly reduce bush fly numbers during summer, by drying out and burying dung so there is nothing for the maggots to live on. This significantly reduces intestinal parasites and bacterial diseases like pink eye. In 1965-85, the CSIRO’s Dung Beetle Project introduced 23 foreign species of dung beetles to Australia, which reduced bush flies by approximately 90%. Dr Bernard Doube from Dung Beetle Solutions says that if the European beetles adapt well to their new environment, the parasite problem could be solved within a decade or so.

R&D activities associated with farming, such as those related to plantations, vineyards or orchards, may be eligible for the R&D Tax Incentive. This scheme encourages companies to conduct R&D activities that may not have been commenced otherwise. To find out whether your activities qualify, contact Swanson Reed R&D Tax Advisors for a free assessment.